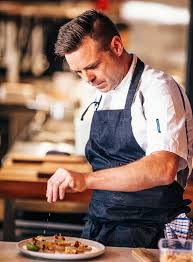 Denise Irvine chats to a few of the faces of Feast Waikato, first up Ben Bayly

About: Auckland chef Ben Bayly was raised on a Te Awamutu dairy farm. He trained as a chef at Waikato Polytechnic (now Wintec), he travelled extensively and cooked in high-end eateries in Melbourne, the UK and France. Back in New Zealand, he was executive chef at Auckland restaurant legend, The Grove, and at Baduzzi, on Auckland’s waterfront. Currently, he owns The Grounds family eatery in Henderson, Aosta in Arrowtown with Michael Hill (Jeweller), and he recently opened the beautiful Ahi restaurant in Auckland’s sparkling new Commercial Bay development. Ben’s won more awards than you can poke a paring knife out, he’s been a judge for television series My Kitchen Rules NZ, and his pathway to Ahi featured in the television series, New Zealand Food Stories.

Ahi, translated from Te Reo as fire, nods to the kitchen, and to the passion that drives the team. It aims to bring the best of New Zealand food and hospitality to Auckland’s CBD.

Taylors Restaurant in Te Awamutu, I was 15 years old and I washed the dishes. Taylors was owned by the Couplands [Rosalie and David], the parents of Megan Priscott, who I’ll be cooking with at my event for Feast. So that’s a nice twist. At Taylors, I’d get there after rugby practice on Thursday night, wash dishes all night, and fall asleep in class at school on Friday. I’d play rugby on Saturday then get to Taylors to do lunch and dinner dishes. There was a great  chef there, Don Stevenson, who put me on the pathway to Waikato Polytechnic, which was a great place to train. Later I worked at Rustici, in Hamilton’s Riverbank Mall, under Wayne Gonano, another good chef.  I was lucky to hit these mentors when I was young; they took me under their wing and instilled a strong work ethic.

Meat from Magills Butchery, in Te Awamutu. While a lot of small-town butchers have gone under, Magills has adapted and thrived. My mum bought meat from them. Their pork is very good, as is their Hereford Prime. And their saveloys are great; we had them as kids. We use them for the hotdogs at The Grounds.

I also love rua potatoes grown by my uncle, David Kay, at Parawera, just outside Kihikihi. They are fantastic new-season spuds. They always come out at Christmas. You just need mint, butter and salt at the end. Holey moley, they’re good. And Waikato asparagus is the best in the country. I get it from Bill Cummings [Greenfern, Bruntwood Rd, near Cambridge]. He also does the best white asparagus, a world-class ingredient out of the Waikato.

It’s rustic precision. I’ve got a fine-dining background but I want the presentation to be accessible, generous, and to look beautiful and natural on the plate. Not contrived. I look for balance when I cook, I like acidity. It cuts through the richness.

It’s the only off-site thing I’m doing this year; I’m so involved with the restaurant. I liked the idea of doing a dinner in my old home town.

Give us a hint on what you’ll be cooking?

Some of our favourite dishes from Ahi, using the best of New Zealand ingredients at the time. I’m doing entrée and main, and Megan [Priscott] is doing dessert. There are canapés too. I want it to be a bit of a surprise, bring some things that people maybe haven’t had before. The dinner’s expensive but it will be value for money. I’m committed to that.

I love cooking seafood. I found a guy, Tim Barnett, who spear-fishes, and he gets fish for me. It is top quality, and the most sustainable way to fish. You only choose the ones you want. [Ocean Speared, Hand Selected, top of the South Island].

Native timber. At Ahi, the whole restaurant is built in native timber. My dad, Graeme Bayly, instilled a love of native trees in me when I was a kid, we knew all the names. I’ve collected salvaged native timber for years, some of it is truly ancient, and it’s all found a beautiful new home at Ahi.